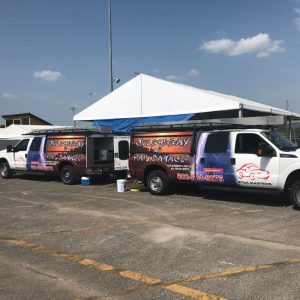 Detail Masters recently completed restoration of over 1000 vehicles in Texas. After an oil line leaked at a local refinery, orange overspray affected thousands of vehicles in a local neighborhood. The oil contaminates proved difficult to remove for most local car washes and detailing shops. That is because oil contaminates tend to bind vehicle surfaces including clear coat, windows, trim elements and wheels, and traditional products don’t have the necessary formulas needed for removal.

Detail Masters offered a unique service for the refinery claim managers in that they provided a large mobile crew, onsite claim management, and the expert knowledge needed for proper vehicle restoration. Within a few days of being called to the site Detail Masters was on the ground with a 30 man crew quickly restoring local resident’s vehicles. 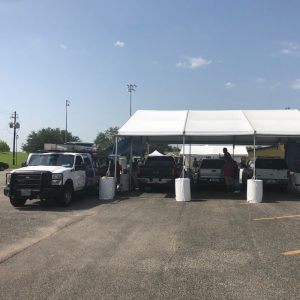 The overspray incident presented a difficult environmental dilemma because there was concern that the cleaning process would contaminate the local groundwater. Detail Masters was able to find the necessary treatments and solutions needed for restoration without the use of any water. Utilizing a water-free cleaning process Detail Masters was able to prevent further environmental contamination and save the local city hundreds of thousands of gallons of tap water.

Detail masters has been saving painting contractors and their claimants money through innovative overspray removal techniques for over 50 years. 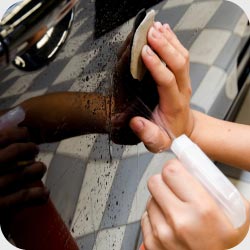 Removing overspray on vehicles and car

As a coatings contractor, you can learn a lot from overspray removal specialists and insurance adjusters who see overspray scenarios every day. If and when you experience an overspray problem, their advice can greatly minimize your aggravation. It may even help you prevent many overspray cliams from happening in the first place.

Aside from actual removal, public relations is perhaps the most valuable service supplied by overspray removal companies. Few contractors are equipped to bear the burden of contacting and dealing with all the individual owners, most of whom are unhappy about the condition of their cars and the inconvenience of getting them repaired. Experts know how to keep the hysteria and hassle to a minimum.

“Contractors don’t like to have to call us, but what we provide is nice – they just give us a list of names [of oversprayed vehicles’ owners] and we take it from there,” says Just Like New’s Goodhart. “We call the people, handle the scheduling, and go to their home or job and clean their vehicle. When we do jobs on big plants, we provide the shuttling back and forth, making it as convenient for the owners as possible.”

Liability for overspray almost always falls on the shoulders of the contractor, despite the fact that a job’s price did not allow for adequate containment. “It happens on numerous jobs, and you can’t completely get around it, other than by fully containing a tank, which is not a cost that most people can deal with,” notes Patrick Healtsley, vice president of Pittsburgh Tank and Tower of Sebree, Kentucky, a contractor who’s dealt with his share of overspray problems. Containment on windy, elevated structures such as tanks, towers, and bridges can more than double the cost of a job, usually making it prohibitive, he adds.

Large contractors may have a general liability policy that includes overspray, but overspray coverage is getting increasingly harder to obtain, says Neal. “Getting insurance these days has radically changed,” he notes. “Sometimes policies have per-car deductibles of $250 or more; others have $5,000 or $10,000 deductibles. Some large organizations end up biting the bullet and insuring themselves. For small contractors, even if they have insurance, overspraying a parking lot with 2,000 vehicles is a catastrophe.”

In smaller overspray scenarios, it may be easier just to pay the per-car price charged by most overspray removal companies. “Some companies are now bidding overspray into the job, depending upon what’s around,” says Goodhart. “If you’re doing a job in the middle of town or on a bridge and containment isn’t economically feasible, you may want to try to get overspray removal costs included.” 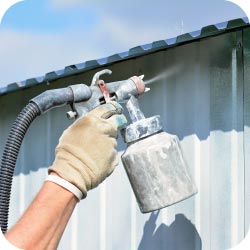 How does overspray end up on vehicles

When it comes to overspray, a little prevention can be worth a fortune. There are measures that can be taken at various stages. In the case of water storage tanks, for example, prevention should begin when the location for the structure is being selected, says Healtsley. “The city should pick a site that is secluded from everything,” he says. When he is called on to coat a structure in a tight area, he selects a “dry-fall system” – one of the many coatings that are engineered to air-dry before they hit the ground. “It does have a different appearance; it’s flatter,” he says. “That may be a problem when people want a nice gloss on structures.”

Besides choosing a dry-fall system whenever possible, contractors should always be away of what’s in the vicinity of where they are spraying. “If you’re working on a water tower that’s in the middle of an auto mall, you’d better think that you’ll have some serious exposure,” says Beecher. And don’t underestimate the power of the wind. Goodhart recently cleaned 300 cars that were oversprayed by a contractor who had checked the wind at ground-level and thought it was fine. “Later, they noticed that a piece of plastic tied to a power line was blowing wildly,” he said. “Just because there’s no wind on the ground, doesn’t mean it isn’t blowing 50 feet above your head.”

Neal advices contractors to develop a partnership with an overspray removal company before they actually need one. “Things are going to happen, but sometimes you can avoid them by talking to someone who’s been there,” he said. “Overspray companies have a wealth of information that contractors can embrace.”

“Get referrals from peers who’ve had good luck with an overspray company, and then invest the time to strike up a relationship with them,” adds Beecher. “It may be a relationship that will never be called upon, or it could be called upon tomorrow. It’s better to have a contingency plan in the event that a disaster does happen than to be scrambling after the damage is already done.” 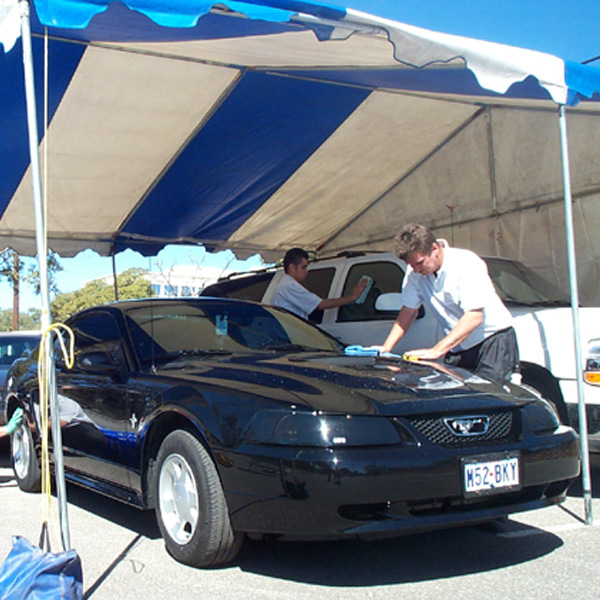 For over 50 years Detail Maters has been successfully removing overspray from vehicles with unparalleled customer service. Our process is simple, fast, efficient and remarkably scalable. We work on claims from 1 car to thousands. Our success can be attributed to 5 important things.

Detail Masters is routinely saving contractors and insurance companies thousands of dollars by repairing moldings that the other overspray companies refuse or do not know how to repair.

Recently, a contractor hired a “low priced” overspray company. This contractor ended up with a higher price than quoted and most of the vehicle owners filing claims for molding replacements. The cost of these additional repairs averaged $3,500.00 per vehicle.

Unlike “Overspray Companies” cleaning methods that typically damage the moldings, our process only removes the overspray with incredible results.
Detail Masters was able to inspect and repair all the vehicles damaged and save this contractor over $ 100,000.00 in additional claims. 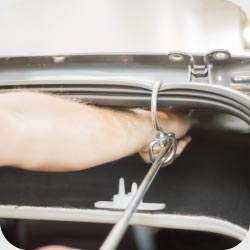 After a hail storm cars can be covered in dents from hail strikes. Depending on the severity of the storm dents can be the size of nickels to the size of golf balls, and in some cases even the size of oranges. Traditionally to fix a damaged vehicle, its individual panels would have to be stripped, dents smoothed and paint reapplied. This would come with a significant cost, particularly if more than one panel was affected by hail damage.

Repainting jeopardizes the value of a vehicle and leaves the coat more susceptible to rust, fading, chipping and pealing. This has to do with the way paint is applied in factories vs. local body shops. In a factory paint is applied at the beginning of vehicle assembly. Paint is applied to the frame and panels before anything else is added. This allows for painters to coat the entire panel and frame inside and out. It also insures that one even color is applied. 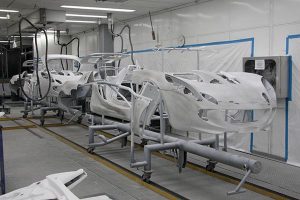 Only in a factory is paint applied to the entire frame at once.

Once painting is completed the factory then “bakes” the paint to the car at extremely high temperatures. This guarantees the paint’s longevity.

Auto body shops don’t usually have the resources to “bake” paint onto a vehicle and can’t usually strip a vehicle down to it’s frame.  They generally only apply paint to the exterior portions of panels and frames by tapping and masking the rest of the vehicle. Paint is usually dried at room temperature. Overall the coat is weaker, particularly along its edges.

Re-Painted surfaces are also usually more uneven and rough than factory painted ones. This is because the factory panels are brand new when paint is applied. Matching the overall smoothness of factory panels requires panels to be perfectly clean (dust and debri free) and buffed extensively. Few body shops, if any, can match factory smoothness.

Lastly, Auto-body shops don’t have access to the exact paint that was used on a vehicle originally. Even if the shop takes the time to get the paint information from the factory to match a specific factory color, paint varies greatly by batch so matching colors exactly is impossible (even at a factory paint colors vary from batch to batch). This means that more than likely the re-painted panel will likely be a slightly different color then the original coat.

Paint-less Dent Repair insures the original body paint remains untouched. Dents are “pushed” or “pulled” using a variety of innovative techniques and instruments. This preserves the body paint and dramatically reduces the cost of hail claims repairs. For more on PDR cost saving see the chart below.

Note actual cost will vary depending on location, claim size and vehicle type.

Request A Quote Today Get Started